Today in my work with Madame Pele I explored what her stories which included her sisters could reveal about the relationship between the self and our inner divine feminine. There are several tales of Madame Pele with her siblings but here are few shared from Robert’s Hawaii which you can visit here.

One common legend says that Pele – who was born in Honua-Mea in Tahiti — was sent away by her father because of her difficult temper and for seducing her sister, Namakaokahai’s, husband. She found her way to the Hawaiian Islands where legend after legend bubbled up around her countless lovers, infidelities and feuds and heated outbursts.

Another well-known story spins a web that Pele’s older brother Kamohoalii (the king of sharks) provided Pele with a large canoe which she and her brothers took and sailed away with – eventually coming to Hawaii. When she made landfall in the islands it was on Kauai, where she was attacked by her sister Namakaokahai and left for dead. According to legend she was able to recover and escaped to Oahu where she dug fire pits, including the crater today called Diamond Head. She traveled through the island chain to Molokai and on to Maui where she is said to have made Haleakala volcano.

Upon discovering Pele had survived, Namakaokahai traveled to Maui and the two engaged in an epic battle near Hana, where Pele was torn apart by her sister and became a god, finding a home on Mauna Kea on Hawaii Island. There she dug her final fire pit, the Halemaumau Crater at the summit of Kilauea, where many believe she resides to this day.

As shown here, Pele appears first as a gifted mortal among a family of powerful beings. She initially is sent away from home for her temper and seduction of her sisters husband. Having relations with a sister’s husband is a narrative taken up by many of our Life and Death Goddesses including Inanna and Isis. In Isis’s case, her sister Nephthys slept with Osiris birthing Anubis. Madame Pele is not described as the gentle, kind, submissive feminine. She expresses herself in a way through which there can be no misinterpretation. She takes what she desires even when that action may be judged. 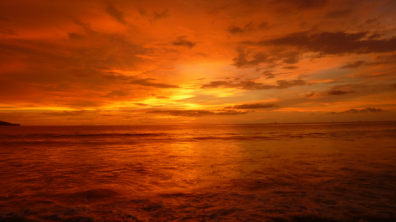 Madame Pele then makes her way to Hawaii with several tales that express how that came about. Following her journey from her place of birth to a new land where she creates her own home. Madame Pele, must move beyond the restrictions of her home to a place where she is able to express her sovereignty. Just as we are often forced out of our comfort zones whether that be a home, job, relationship or view of ourself, Madame Pele finds herself in a new world with endless possibilities.

Madame Pele is the unapologetic woman who embraces her sexuality, her drive towards greatness, her need to protect those that she cherishes, and unwillingness to take mess from anyone. She stands up for herself, challenging our dual natures. Right and wrong are not clear or even important. It is the JOURNEY that matters. Madame Pele reflects our boss witch self. She knows her worth and her power…which leads to her downfall. But it is not defeat, it is the transition of life necessary to take her role as a God. This is Madame Pele’s journey to the underworld. Upon her death she becomes the sovereign of the land. Through Madame Pele life is given and life is taken away. She sacrifices her first form as a mortal to become an archetype of the fierce feminine.

Madame Pele is the our inner self who gives no fucks. She lives her life as she pleases giving just as much as she takes. When I connect to the energy of Madame Pele, I feel this bubbling up of energy. It is like a warm liquid fire (lava anyone) that feels fluid and yet stable. I can be petty at times and what would be described as selfish. I am prioritizing my own happiness and health regardless of what others want from me. This has brought a lot of conflict into my life. But honestly, I don’t care. Most of the folks who I am having conflicts with I would rather not be around anyone. I do not fear them even if they have the power to destroy my reputation or how others view me. It is not about them, it is about chasing my dreams. Madame Pele didn’t just chase her dreams, she actualized them.

Madame Pele had a difficult time finding a home where she and her family could be safe-so she made her own and continues to build the land through which her family can thrive with each eruption. Madame Pele creates the flow which others eventually learn to either get in line and respect or get out the way (no one wants to provoke a volcano Goddess). The question is do you judge your flow or do you embrace it?